Lower Body Mechanics In Hitting: Understanding Hanging Back and Drifting 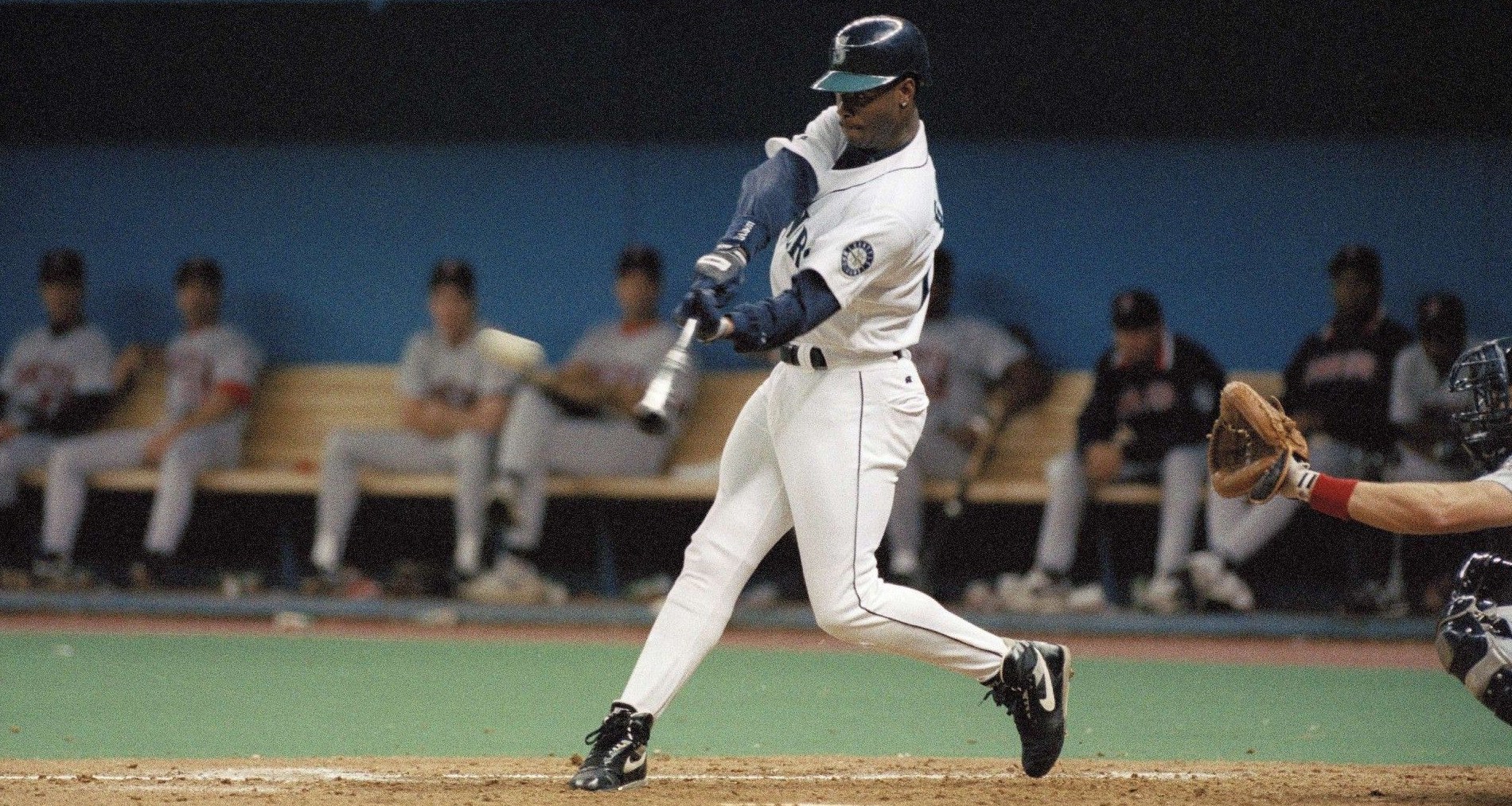 Though we remain agnostic to any specific hitting philosophy, we do believe that certain characteristics are more biomechanically efficient or productive in terms of a hitter’s ability to generate power.  One of those characteristics is called “Hanging Back” (which we’ve sometimes referred to as “Squish the Bug”).

Hanging Back refers to the lack of weight transfer in the swing.  We identify “Hanging Back” by drawing a vertical line up from the outside of the back leg at stance.  If at any point between stance and contact the heel moves behind the line, we deem that the hitter is “Hanging Back.” 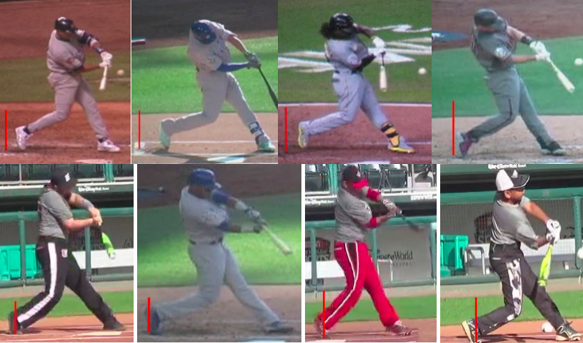 For whatever reason, Hanging Back has been one of the more controversial concepts on social media.  We think this is largely due to misconceptions with the characteristic and how hitters use the ground to generate power.

We don’t mind if coaches disagree, but we don’t want coaches to misunderstand.  We thought it would be helpful for Dr. Rose to explain how we evaluate it and why it matters.

We’ll often use examples of baseball’s most prolific hitters when posting examples of hitters who don’t Hang Back or Squish the Bug.  Not only do hitters like Harper, Trout, and Edgar not Hang Back, they turn their hips and shift their weight so aggressively that it actually pulls their back foot off the ground.

Whenever we post one of these swings, we’ll almost invariably receive response with a GIF of Bonds or Judge and a comment like “staying connected to the ground produces more power.”  Here are a few misconceptions that we see with that statement:

1. Swing Characteristics vs Swing Faults: First of all, there are examples of HR swings where Bonds and Judge are hanging back.  Is it the most powerful strategy? No. Does it work for them? Obviously. This is why we call them hitting characteristics, not faults.  Judge weighs 280 lbs and Bonds weighed 220+ for the most prolific period of his career. They are giant men who don’t need to create as much ground reaction force to hit for elite power.  There’s a great chance that Jose Altuve doesn’t have the same slugging percentage if he leaves weight on his back foot like Bonds does here:

2) Ground Reaction Force Matters Until It Doesn’t:  The back foot is not insignificant in the baseball swing.  However, once the linear shift is complete and the back foot begins to unweight (evidenced by the heel lifting or foot moving forward), it is no longer making a meaningful contribution to generating ground reaction force.  Yes, the toe may be touching ground (connected!), but touching doesn’t always mean pushing.  After all, if the back foot is moving towards the pitcher, it's impossible for it to also be pushing against the ground (applying force) to create rotation.

In many throwing and striking sports, ground reaction force matters until it doesn’t. There are a number of sports where athletes use the ground aggressively to generate power, but are completely OFF the ground approaching impact or release (via BODITRAK).

Some hitters may benefit from keeping the back foot in contact with the ground, but it has more to do with helping them maintain balance and deliver the bat to the ball than it does with helping them generate power through GRF.

As with any technical or physical adjustment, improving power and efficiency doesn't always translate to performance, especially in a reactive task like hitting a baseball.  It's why our philosophy is centered on an individualized approach that's based on the Body-Hitting Connection: “We don’t believe there is one way to hit, rather there are infinite number of hitting styles. But we do believe the most efficient hitting style for every player is based on what their body can do.”

3) We Are Identifying A Characteristic, Not Quantifying Power:  Avoiding “Hanging Back” doesn’t require the trail foot to leave the ground or move a certain distance towards the pitcher, it just requires that it doesn’t move further away from the pitcher between stance and contact.  That said, if you watch the back foot of many of the most powerful hitters in baseball it will leave the ground at some point between the end of the negative move and contact.  Once unweighting occurs, powerful hip rotation can actually PULL the back foot off the ground. Look at prolific hitters like Mike Trout, Bryce Harper, Edgar Martinez or this recent Nolan Arenado HR:

This is a result of the aggressive weight transfer and hip turn, not the intent.

As with all of our hitting characteristics, Hanging Back might not be a technical issue, but the product of a physical limitation.  Common physical causes of Hanging Back include poor lower body stability and strength or limited mobility in the hip and lower leg.  These physical capabilities are evaluated by a number of our screens including the Hurdle Step, Toe Tap, Deep Squat, and Hip 45, among others.

If Hanging Back is an issue that is limiting your hitter's power, you should screen to evaluate whether or not it is the result of a physical limitation.  If it is, your coaching and cueing will be largely ineffective.

Interestingly, Hanging Back can share many of the same physical correlations as an “opposite” hitting characteristic called “Drifting.”  Drifting occurs when the hitter’s lead leg does not firm up after the first move and the pelvis continues to move towards the pitcher during the swing.

Look at this GIF of a Pujols swing (GIF via Hitting Daily).  From gather to contact, his center of mass would fit in a phone booth, but his center of pressure is going from 100% on his back foot to 100% on his front foot (back foot is off the ground from the end of this first move until contact).

Ichiro drifts a bit here, but it works for him.  Characteristics, not faults.

There are plenty of hitters who can hit for power while hanging back.  Similarly, there are a number of hitters who can have success while drifting.  If Hanging Back or Drifting are inhibiting your production, we believe the most important thing you can do is evaluate whether or not it is a technical issue or a physical issue by using the OnBaseU screen.

If you’re interested in learning more about the OnBaseU screen and upcoming Certification seminars, visit the seminar section of our site. 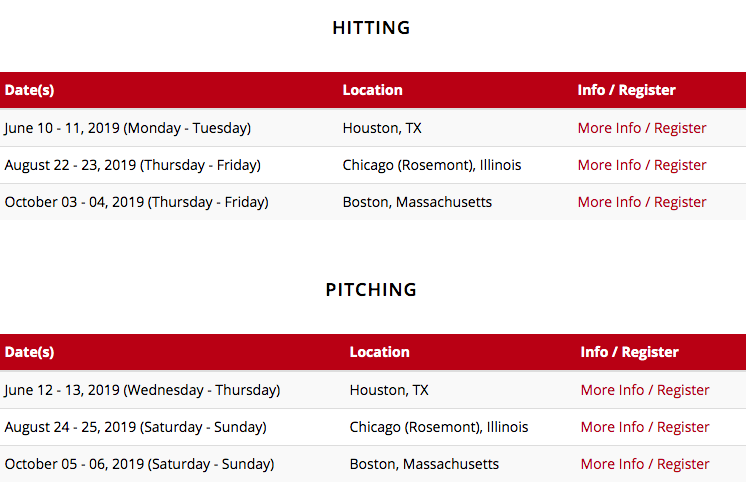